A full working set of tools, and Why did I make these tutorials

This set of WebGL tutorials is intended to get you up and programming your own 3D interactive web pages as quickly as possible. The tutorials are mostly javascript, moderate use of html in JSP (Java Server Pages), with some tie-in to Java. They use the eclipse development environment.

The WebGLTutorials owe much to the WebGLLessons from which they are forked. This series of tutorials is my first webGL project.   I had previously had several 3D ineractive graphics projects using legacy OpenGL (before the introduction of shaders) programming in C++. Part of my path toward 3D interactivity was a book by LeMothe... The black art of 3D game Programming. Therin was an attitude, some portion of which I attempt to share with you. Most recently I joined a small team writing a web interactive database application, using java and a modest amount of javaScript. My own style of picking up new coding skills is to take working code and mutate it towards my own ends. This set of tutorials will hopefully be useful as the beginning state for for your projects.

One choice I refused to make was the html server to use in doing my debugging and deployment. Some of my clients require the additional perceived security of a local html server such as TomCat, running behind a firewall. I also see the advantages of a cloud based deployment system such as the GAE (Google App Engine). I was able to set things up so that a single eclipse project could run under both tomcat and GAE. Well, almost. GAE uses a datanucleus system to allow storage of information, but tomcat has no such capability. These tutorials do not use the GAE datanucleus functionality, so the datanucleus code can be commented out. With this modification to a project both GAE and Tomcat compile and run localy for debugging, and either can be used for deploy.

Among the difficulties faced along the way toward becoming functional with javascript, I was much frustrated by the limited debug capability. The most frustrating behavior was that when it hits some errors, it just stops. No complaints. Nothing. Just stops. I developed the tactic of using jquery AJAX to allow javascript to log (by passing character strings to the server). My usual development platform is firefox, because it has firebug. I prefer Chrome for day to day usage, but without the feedback provided by firebug, not for debugging/development.

Most example code sets have gone the route of providing their content in a minimalist fashion, such as providing their code in a single .html file.   I chose to go the other extreem, sharing an entire eclipse project package, because the upside benifits seems large compared to the downside.

Download all the packages in the table below:
The versions listed are the most recent stable released versions of the products. I like 7Zip.exe for unpacking the zipped packages: it leaves the original zipped version, and makes a copy   If the links provided should fail, remember always that     "Google is your friend".

My procedure is to go in and remove all currently installed versions of java first.   I and several of my friends have gotten into disfunction from having multiple copies of multiple versions of java on our computers. Eclipse points to a java environment, and by un-installing all the versions you no longer need you will avoid pointing to one of the downlevel javas. On my windows systems uninstalling a program is
control panel...
programs and features...
click on publisher...
look under two publishers (IBM, and more likely oracle) for anything JAVA
click on the icon to the left of the java program name
wait for it to finish uninstalling
look to see if there are any other java's installed, if there are... click on the next one

7-Zip extract file to any convenient location. I chose c:\ which resulted in 7-Zip creating c:\homespace

7-Zip extract file to any convenient location. I chose c:\ which resulted in 7-Zip creating c:\eclipse

After eclipse is unzipped you'll want to execute the eclipse.exe. With this first execution, it will prompt you to select a workspace. You should enter     c:\homespace     and you probably want to click the "use this as the default" checkbox.

Getting a tomcat server running under eclipse

Down in the lower right corner of the eclipse app... click on the "new server wizard" link in

and you will get the New Server dialog with one of two outcomes: Success is if your tomct directroy is identical to the tomcat directory on the computer which created the homespace. Success looks like 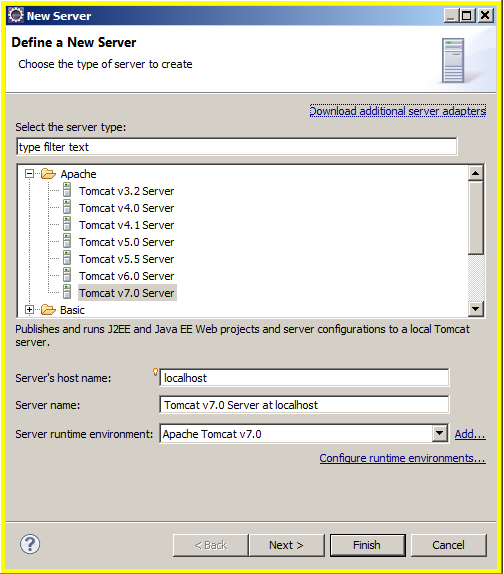 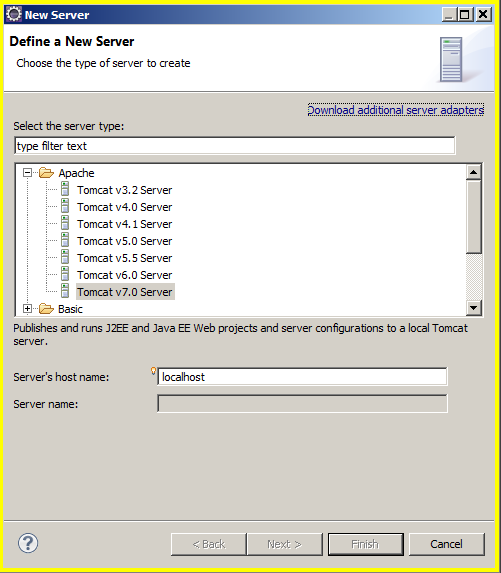 If you have success skip ahead to Add Package To Server
If instead, you have failure you need to close the New Server dialog and go to the eclipse main menu bar.
Window...
Preferences...
Server...
Runtime Environment
The Server Runtime Environment dialog will show the link to the tomcat directory on the computer which created the homespace. 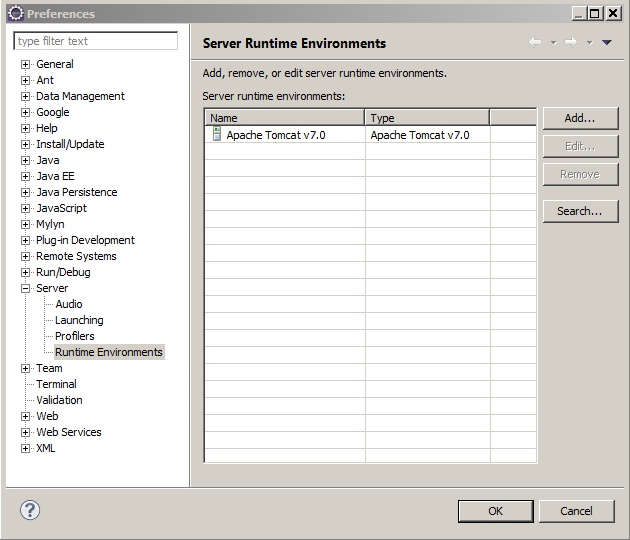 You need to highlight it. 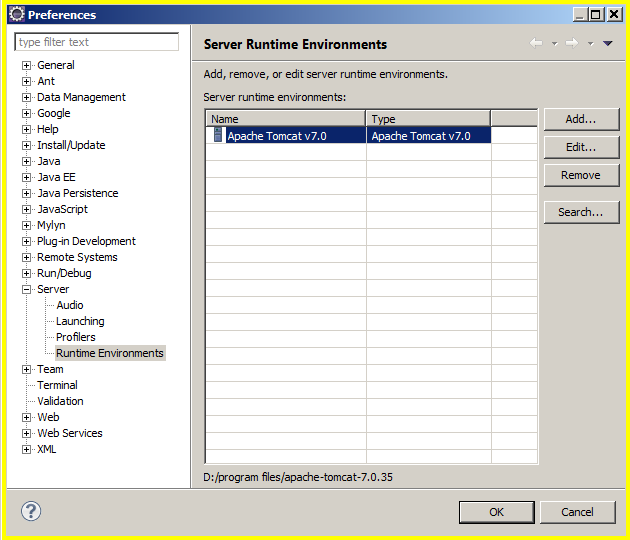 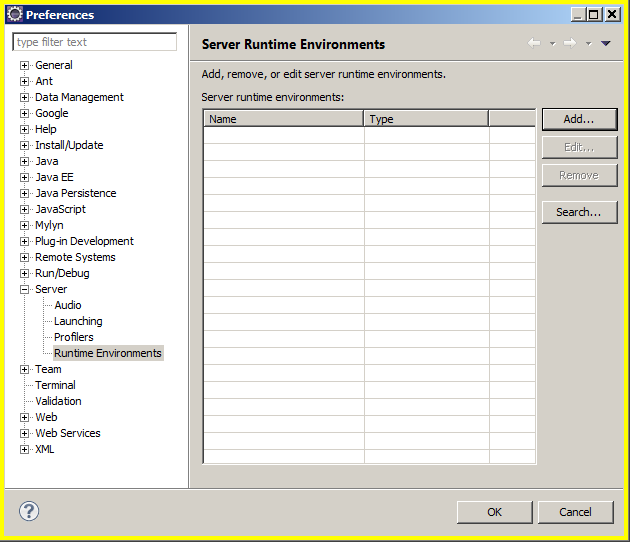 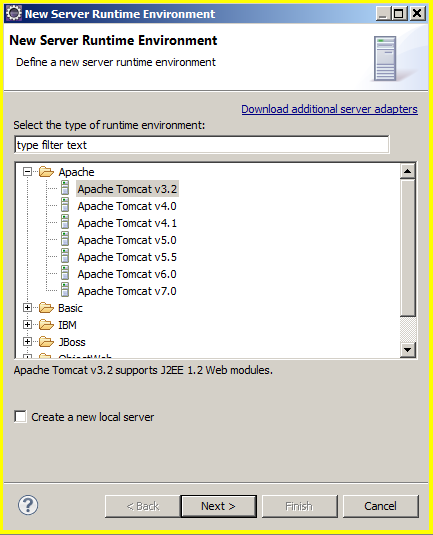 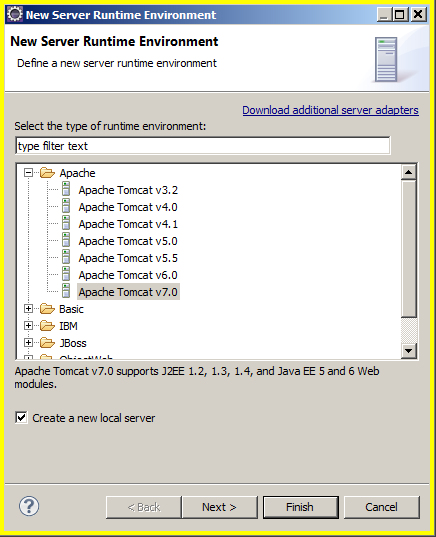 clink on the the Browse button and in the resulting "Browse for Folder" dialog and navigate to your tomcat directory. Highlight it and click ok 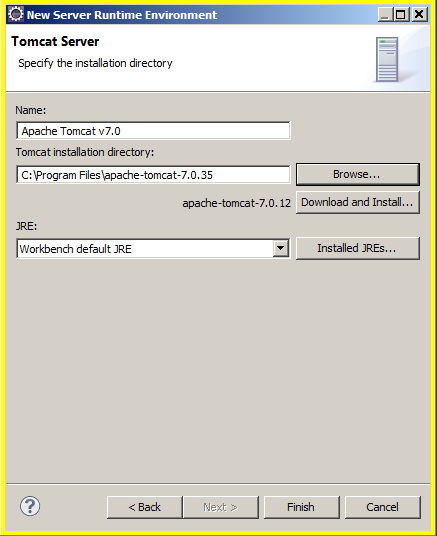 click on the installed JRE's button to open one of the many different eclipse "Preferences" dialogs.
Use the ADD button if necessary (this will not be necessary if you followed my suggestion to purge other Java JRE's and Java SDK's prior to the install of the current version SDK).
It is vital, that you have the checkbox next to the JDK clicked.
Click OK 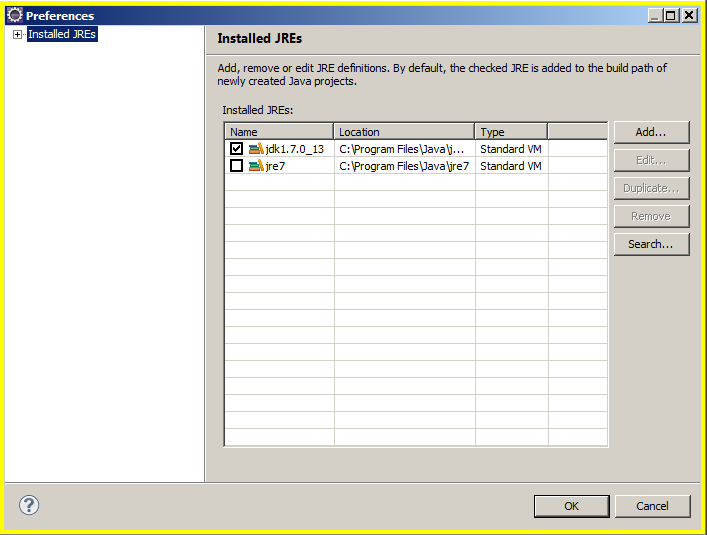 click the pulldown just to the left of the Installed JRE's button, and select the jdk 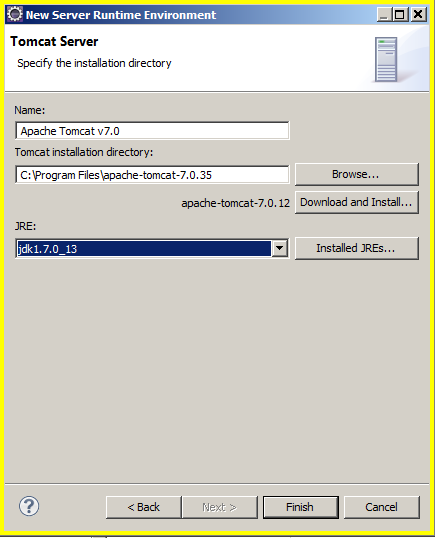 Adding WegGLTutorials to the packages served:
Go to the servers tab (probably in the lower right corner) and RIGHT mouse button click on the Tomcat v7.0 ... The dark blue highlighted line 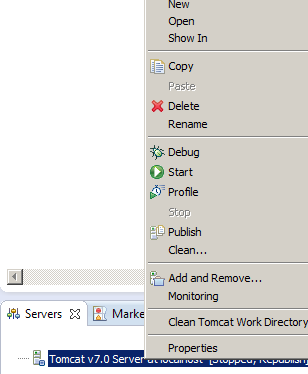 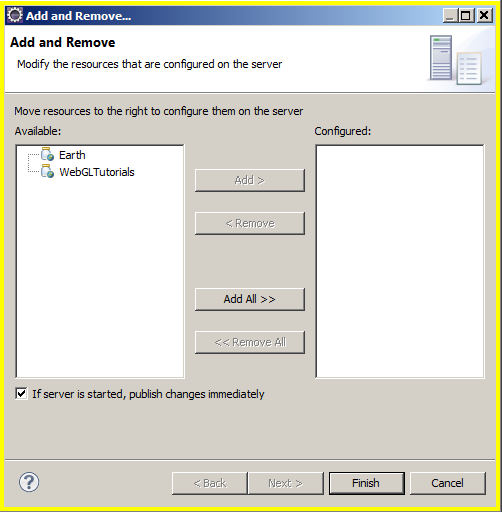 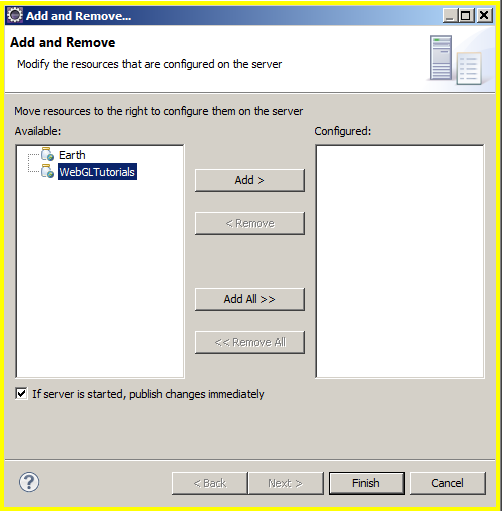 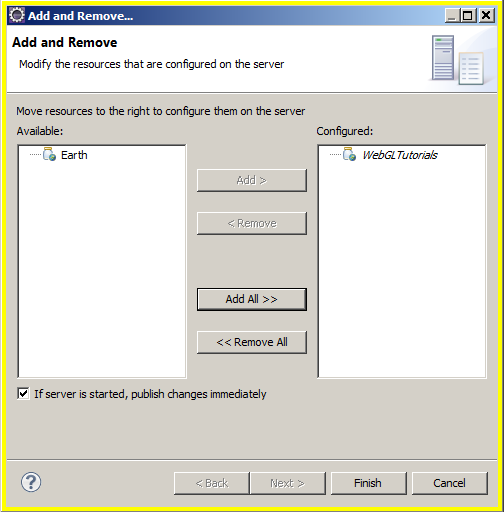 now start the server by clicking on the little green circle (in the servers tab, not the one in the eclipse main icon bar)

You should now have a working html server in your computer, and http://localhost:8080/WebGLTutorials/WebGLTutorials should run a copy of these Tutorials
When you edit the various files in this tutorial, look up at the name of file in the tab at the top. There will be an asterix to the left of the name signifying unsaved changes have been made. Get ready to hit ctrl-S to save the file, but look down at the servers tab. The full text of the line is
Tomcatv7.0 Server at localhost: [Started,Syncronized]. When you hit the ctrl-S, the last word will change to "republish" for a short time and will then switch back to Syncronized when the file edit changes have been compiled. Eclipse will also remove the asterix next to the file name in the file tab.
Should you wish to force a restart of the server, with a re-compile of the project, that server tab little green circle has become the server restart button. Halting the server is the red square. Or you can right mouse click on the Tomcatv7.0 (the dark blue bar in the image above) and get the popup menu. If you have been doing a lot of editing, and things get wierd, among the things to try is to stop the server, get the popup menu and click on "clean the server directory". One of my friends does this regularly.


These instructions are based on the Google App Engine The google instructions do not include the way to allow tomcat server compatability. When you want to deploy your project to the web, you will want to go into the google app engine documentation to learn how to regester your project and upload it.
Help...
Install New Software... 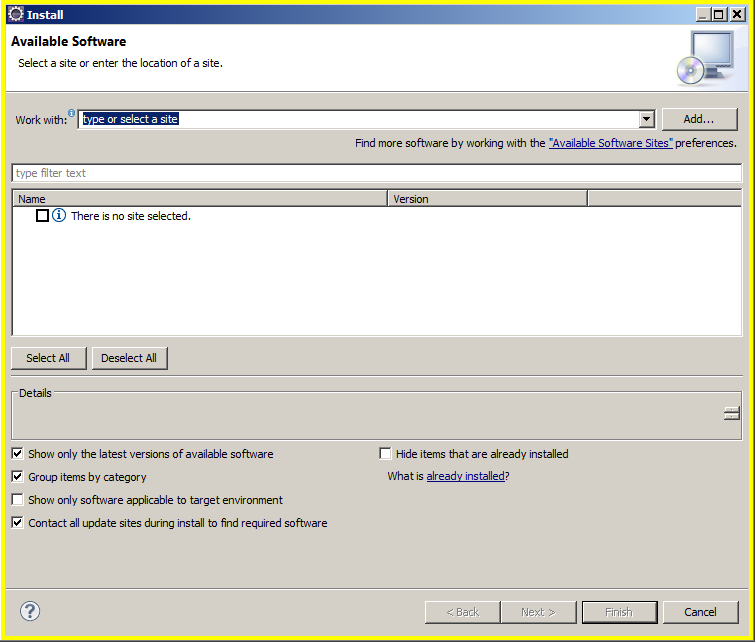 in the work with text box type     https://dl.google.com/eclipse/plugin/4.2       and hit enter.
The block in the middle will show pending for some seconds, but will soon pop up with 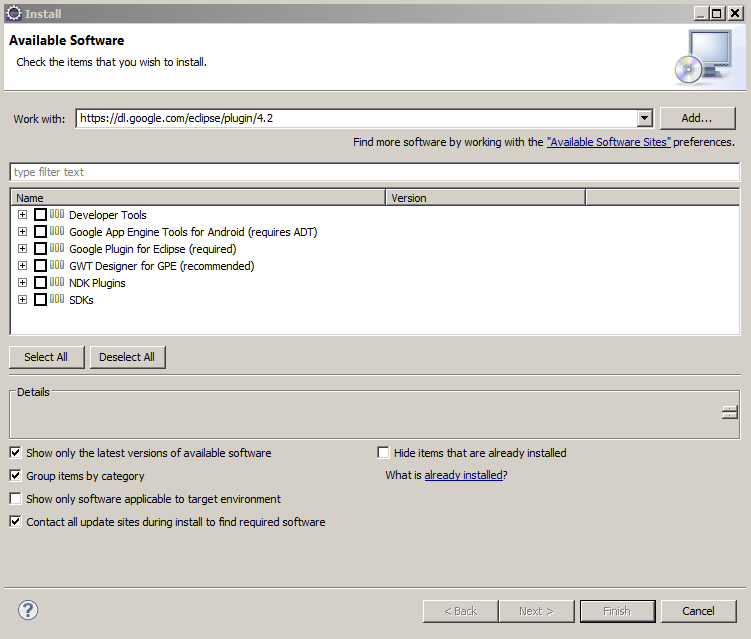 I selected a minimal set, and hit next 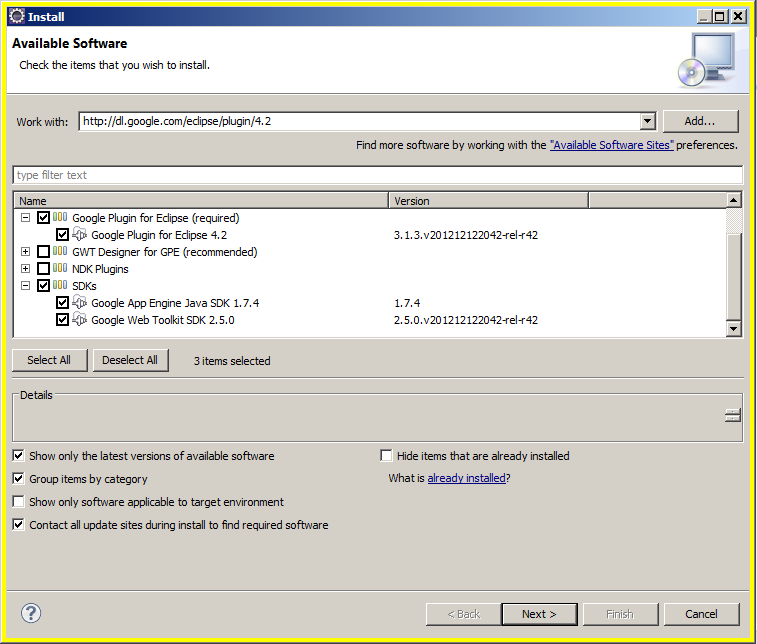 It wants to verify the install details. Hit next. 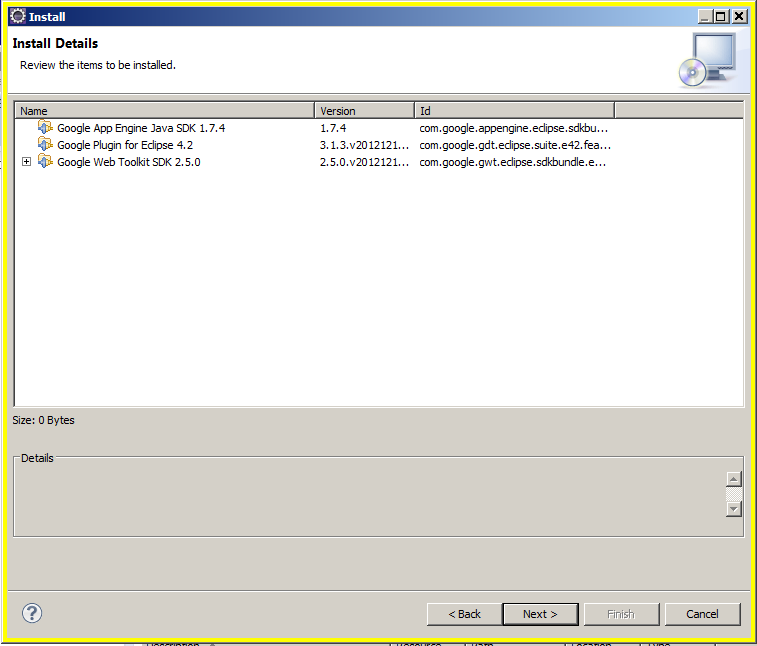 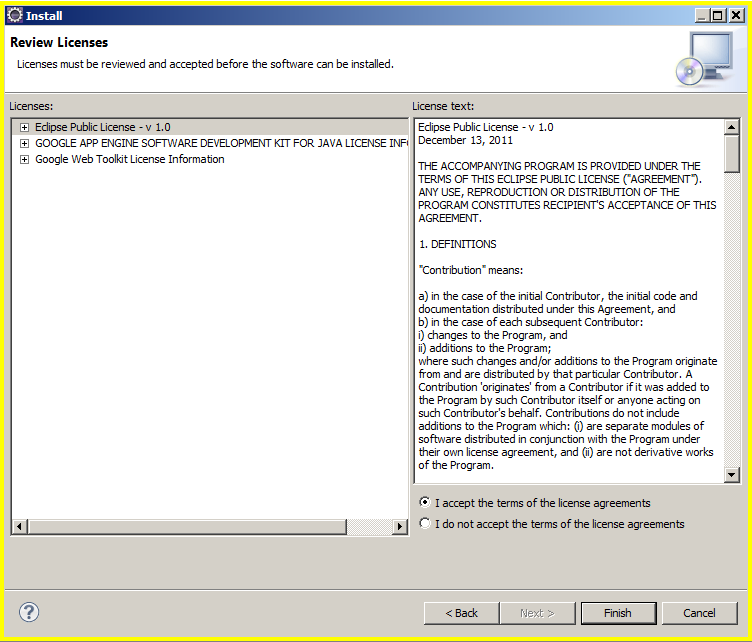 it will take a long time, on the order of a half hour or so, but don't wander off because. about 20 min in, it comes up with this which needs to have it's ok button clicked

when eclipse starts back up again, you'll have the GAE icon in the eclipse icon bar

At this point, you have the GAE installed and can use it as your local server. Go to the Project Explorer tab, and RIGHT click on the project you want to have served.
A dropdown menu drops down. hover over "Debug As" and when the next dropdown menu appears, move over and click on "Web Application" 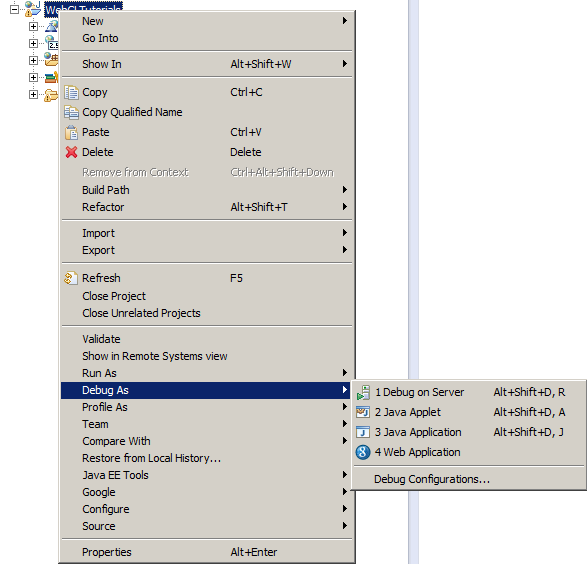 The console will get a lot of red text. This is normal. Eclipse showing red in the console does not even mean that any errors are occuring. After a few seconds the last line shoudl be...
INFO: The admin console is running at http://localhost:8888/_ah/admin
open up your favorite web browser and enter url http://localhost:8888/WebGLTutorials and you'll be running the tutorial web pages on your own local GAE server.

If all that worked, you are ready for Tutorial01